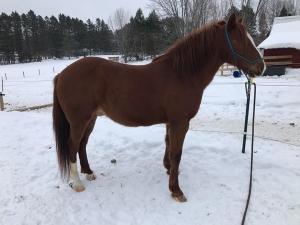 Royal is a handsome sorrel gelding who was foaled around 2006 and stands approximately 14.3hh. Royal originally came to us several years ago in a humane case. He was adopted but his adopter sadly had to return him because she was moving out of state and could not take him along.  We are unsure of his breeding but he appears to be a Morgan cross. He is broke to ride and is currently in refresher training with Anna Hill. We will have updates soon!