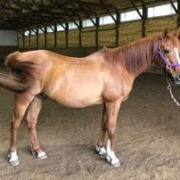 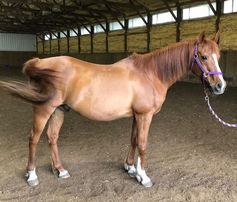 Dawson is a 2002 grade Arabian gelding standing 14 – 14.1 hands. He originally came to MHARF from a December 2017 humane case. He was adopted in April 2018 and has thrived since then. Sadly, his original adopter can no longer keep this much-loved horse and has asked us to help him find a good new home.

Dawson is a sweet, gentle boy who loves people, especially children (under adult supervision). Under saddle, he is suitable for an intermediate rider, or an advanced beginner with guidance from a more experienced person.

He has been ridden both English and Western, as well as bareback. He does not neck rein. He has been ridden by an adult and a young girl in indoor and outdoor arenas since his adoption, but has not been trail ridden. He is a beautiful mover, with gaits more like an English pleasure horse. He is sound, but should probably avoid impact sports such as jumping or barrel racing due to his age. He really isn’t interested in them either, though he will do exercises involving poles on the ground. He hasn’t done much canter work lately, so we aren’t sure about how well he takes his leads.

He is a small, short-backed Arabian, so saddle fitting can be tricky. English saddles must fit the shape of his back and be size 17 or smaller to avoid extending past his ribs and causing pain. Western saddles should have a medium tree and also avoid being too long. He will come with his bridle and Myler snaffle bit, a turnout blanket and turnout sheet.

He has good feet and has not needed shoes, though he probably would need them if ridden on roads or rocky ground.

Dawson enjoys being groomed with brushes. He does not like getting wet and usually avoids rolling in wet mud, which is good since he does not like baths – especially when done with a hose (regardless of water temperature). Care must be taken when using water or fly spray around his hind legs as he will kick out at the sensation (not at the person, but you wouldn’t want to be in the way).

He loads into the trailer, but may have had a bad experience in the past as he tends to get scared inside and arrive at his destination anxious and covered with sweat.

Dawson is a very easy keeper. He was fed grain along with high quality grass hay after his adoption to help him gain needed weight. He gained too much weight and was switched to ration balancer along with the hay instead. He still carries plenty of weight (too much at the moment). He has been receiving a joint supplement (Cosequin MSM) for the last couple of years, but he may not actually need it. He loves carrots (cut no thicker than a human thumb) and would be disappointed if you showed up without them.

He thrives in his current situation of a box stall at night and daily turnout (except in foul weather) with a group of geldings of similar size (under 16 hands). He is not aggressive, but is not the bottom of the herd hierarchy either. He can be difficult to catch in the pasture unless his companions are also coming inside. But turn him loose in an indoor arena and he will follow you like a puppy. He truly has an in-your-pocket personality.