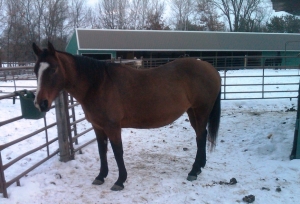 Maggie is a bay grade quarter horse mare who stands approximately 14.3hh and was foaled in approximately 1995. She originally came to MHARF from a 2013 humane case. She was adopted several years ago but has now been returned to MHARF because her adopter could no longer keep her. She has a really nice temperament. Maggie is broke to ride but it has been several years since she has been ridden so needs a refresher.