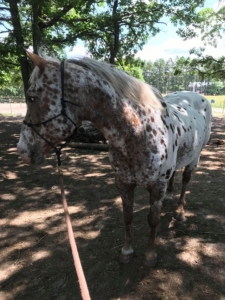 Maddie has been ADOPTED!

Maddie is a 2003 14.2hh leopard appaloosa mare who originally came to MHARF in 2012. She was adopted in 2013 but has now been returned because her adopter could no longer keep her. She is currently in refresher training with Anna Hill. Maddie does currently have an adoption pending.