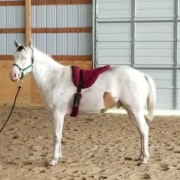 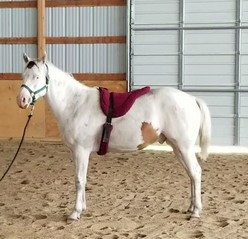 Clark (called “Ziggy” by his foster home) came to MHARF as a stud colt during a recent March 2022 Pine County humane case (approximate age 2 years). He has now been gelded and is currently in a foster home working on ground manners.  Here are some updates from his foster person Carol on what they have been working on as of Sept. 2022:

“Some other interesting information.  Ziggy is extremely fast, and very agile.   He is very playful with my large draft, always bugging him, using a snaky neck, rearing, kicking, pushing around.  Not sure where he will fit into another herd, though one very bossy mare would probably do him a bit of good.  Ziggy will need someone who is willing to impose rules.  Rules are very important for Ziggy, as they are with any horse this young.  Ziggy is a joy to work with, but when Ziggy is upset, he can be a very big handful.  Ziggy can buck!  Very, very big bucks.

I have worked with Ziggy on a lunge line a bit, at first he was a train wreck.  A bit more work and he was starting to respond to voice commands for walk and trot.  Strangely enough, he is very forward in the pasture, but it’s hard to keep him going on the lounge.  Regardless, when Ziggy gets pushed hard, if he’s going to object, he’s going to run to the end of the lunge and buck hard.  I haven’t had time to really work through that.  He’s not mean, just throwing a tantrum.  He always has to work until he’s respectfully responding after he does that, so again, I think it’s just a phase to work through.

Ziggy is truly a sweet, friendly, kind, very smart horse.  It looks like he will be small, I believe the last update I sent you said he was 55 inches tall at his withers.  He has filled out very nicely, lots of muscling on his rump, and his feet have grown out very nicely.  Very good strong hooves from what I can tell.  He will need someone who can remind him who is in charge, but I really think he is going to make someone a very, very good horse.  It’s hard not to just love on him all day long.