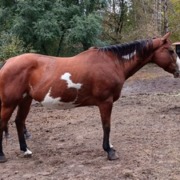 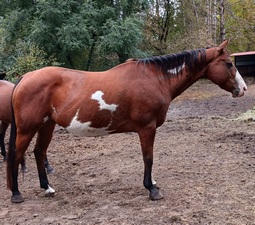 Jay is a paint gelding who was foaled in approximately 2010. He came in during an April 2020 Kanabec County humane case. Jay has been in our rehab program since he came in. He has put on some much needed weight but he is still requiring time in rehab because his hooves were badly neglected in the past. He needs time to grow out a damaged hoof wall that is a the result of what must have been a very large abscess that went untreated.

Update: In September Jay presented with some soreness issues in both front feet so we knew he was having issues beyond the damaged hoof wall. Radiographs showed that Jay has a history of laminitis (which is the probable cause of the severe abscess). He should be able to come out of this with continued farrier care and proper nutrition, but for now he will remain in our rehab program.