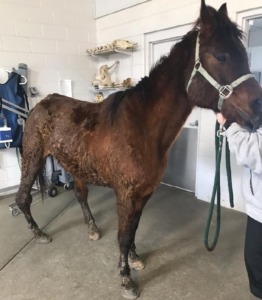 We were contacted by several people who had seen this poor teenaged mare listed for sale in southern Minnesota. Some volunteers arranged to purchase and transport her. From the photo and description in the listing it looked like she needed some help, but it was in no way obvious what her true condition was until they arrived to pick her up. When she nearly went down during loading, we set up an emergency appointment at the vet clinic (thank you so much to the veterinarians at Anoka Equine for allowing us to bring her in on a Sunday). Radiographs showed severe arthritis in the large hock joint of both hind legs, possibly caused by septicemia as a foal or some other untreated infection. She was in extreme pain and after conferring with the veterinarians the decision was made to have her humanely euthanized. You can view a video of Sophie walking HERE.

“I’m so happy I found her!”
Scroll to top